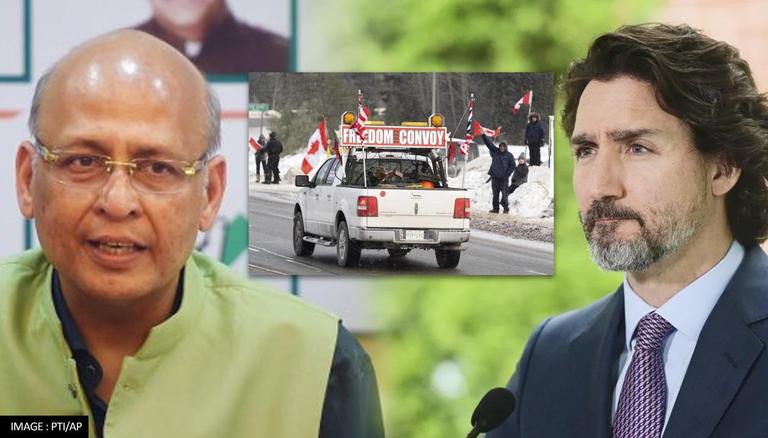 As Canadian Prime Minister Justin Trudeau goes into hiding over security concerns sparked by anti-vax protests, Congress MP Abhishek Manu Singhvi took a dig at the Liberal Party of Canada leader hoping that his ‘anti-India friends’ would come to his rescue. Taking to Twitter,  Singhvi asserted that before poking his nose into the internal matters of India, the Canadian PM should have remembered that ‘karma’ had the potential to ‘hit back hard’. His remark came in response to the unwarranted statements made by Trudeau during India’s farmers’ protest in 2020.

The Canadian Prime Minister on Saturday left Ottawa along with his family to a ‘secret location’ after security concerns sparked over intensifying anti-vaccine mandate protests in the capital city. The protests in support of cross-border truckers began on Saturday when Parliamentary Protective Service estimated an amassment of nearly 10,000 demonstrators in Ottawa. A convoy of truckers against the COVID-19 vaccine mandate descended to the city, sparking an imminent violent turn of events.

Amidst the escalating tensions, Canadian Parliament’s Seargent-at-Arms suspected the demonstrators could show up at official homes. So far, the PM’s office has refused to comment on the relocation of Trudeau, citing security reasons.

In December 2020, Justin Trudeau expressed his unsolicited concerns over the farmers’ protests in India stating that his government had raised the issue through ‘multiple means’ with Indian authorities. Calling the situation as ‘concerning’, Trudeau remarked that Canada supports the ‘right to peaceful protests’.

“I would be remiss if I didn’t’ start by recognising the news coming out of India about the protests by farmers. The situation is concerning and we are all very worried about the families and friends. Let me remind you, Canada will always be there to defend the right of peaceful protest. We believe in the importance of dialogue and that’s why we have reached out through multiple means to Indian authorities, to highlight our concerns.” said Justin Trudeau, not really making clear why they were ‘very worried’.

The Ministry of External Affairs had sharply hit back at Canada’s interference in the internal matters of India saying, “We’ve seen some ill-informed comments by Canadian leaders relating to farmers in India. These are unwarranted especially when pertaining to the internal affairs of a democratic country. It’s also best that diplomatic conversations aren’t misrepresented for political purposes.”