BEIJING |  Gabriella Papadakis and Guillaume Cizeron missed out on ice dancing gold by the slimmest of margins four years ago in Pyeongchang.

The French duo didn’t even make it close in Beijing.

The last on the ice for the free dance, Papadakis and Cizeron scored 136.15 points for their performance to “Elegie” by the early 20th century French composer Gabriel Faure. That gave them 226.98 points, beating their previous world record of 226.61 set in 2019, and easily enough to hold off Victoria Sinitsina and Nikita Katsalapov for gold.

“I think we don’t believe it yet. Honestly it feels completely unreal,” Papadakis said. “We have been waiting for this. This is the medal that we wanted. My brain doesn’t understand it.”

Another set of Americans, Madison Chock and Evan Bates, finished just off the podium in fourth place. 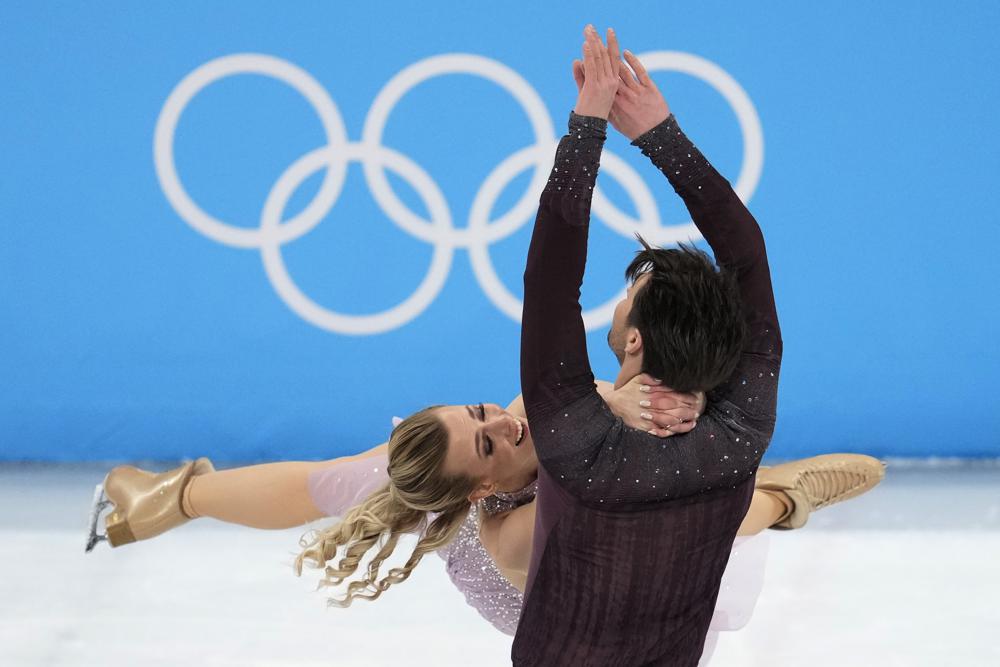 “I have always been told since I was a little girl that my journey through skating should always been about the days and the moments, not just the accolades,” said Hubbell, who along with Donohue finished fourth in Pyeongchang. “I think this medal only came because we really took that to heart in the last four years.”

One of the earliest pairings was Gleb Smolkin and Diana Davis, the daughter of embattled Russian coach Eteri Tutberidze, whose star pupil Kamila Valieva was awaiting a decision from the Court of Arbitration for Sport on a positive drug test that came to light last week. The 15-year-old Valieva was cleared to compete Tuesday night shortly after the dance competition ended.

Tutberidze watched from an inconspicuous corner of Capital Indoor Stadium during her daughter’s performance.

“Diana feels more calm when Enteri supports her because, first of all, she’s her mom,” Smolkin said. “I think for everyone, it’s a great feeling when your family is right here, right behind you.”

Three couples separated themselves from the field on Saturday night, the first night of ice dance, when Papadakis and Cizeron broke their own rhythm dance world record. Sinitsina and Katsalapov were less than two points back and Hubbell and Donohue, riding a personal-best score to their “Rhythm Nation” program, kept their golden hopes alive.

Still, there were some soaring performances from other teams before those three took the ice Monday in Beijing.

The best came from Chock and Bates, good friends of Hubbell and Donohue and teammates of Papadakis and Cizeron at the Ice Academy of Montreal. The American champions bounced back from a mistake in their rhythm dance with a season-best rendition of their astronaut-alien love story to solidify their fourth-place finish.

“We really wanted to be on the podium and I think, you know, fourth place sometimes can be one of the hardest places to finish,” Bates said. “We skated our best and didn’t get the result we wanted, but we did a lot of great things.”

Moments later, Hubbell and Donohue took the Olympic stage for the last time.

With gold medalist Nathan Chen cheering from a section of flag-waving U.S. fans, the two-time world silver medalists seemed to float across the ice in unison to “Drowning” by French singer Anne Sila. Hubbell and Donohue’s biggest mistake came on a lift that lasted a fraction over the 12-second limit, costing them a deduction, but they otherwise showcased the unique power and precision that’s come to define their decadelong long partnership.

It was enough for Hubbell and Donohue to move onto the podium and add a bronze medal to those they’ve won in the team event at the past two Winter Games: bronze four years ago and silver just last week.

“It was a really emotional performance for us,” Donohue said. “It just hasn’t really sunk in yet.”

There is always one ice dance couple at the Olympics that sets the bar for everyone else, though.

That was Papadakis and Cizeron in Beijing.

Even after a season-best skate from Sinitsina and Katsalapov to briefly take first place, the French pair showed poise along with their usual brilliant technical ability and unmatched artistry. From their opening one-foot step sequence to their final choreographed lift, their striking performance was without fault.

The judges thought so, too.

They gave Papadakis and Cizeron the highest marks for their straight line lift, synchronized twizzles, combination spin and curve lift for a free dance score of 136.15 points. That was less than a half-point off their own world record for the second segment of the ice dance competition but more than enough to stand atop the Olympic podium.

“We worked a lot. We built upon the last Olympics. We started winning and everything and knew it was possible,” she said. “For years this was the only medal that we wanted and the past four years were just about that moment.”